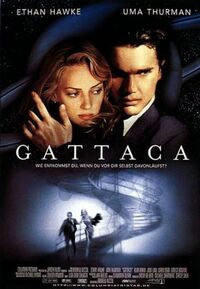 For the company featured in the movie, see Gattaca Aerospace Corporation.

Gattaca is a science fiction movie that was produced in 1997. It was written and directed by Andrew Niccol.

In a futuristic world, science now revolves heavily around life, and the humans are now very dependent on it, or genetics to be exact. There is no more discrimination against looks, characteristics, but against genetic code and the mentally impaired.

Vincent Freeman was born with many defects, due to mutations in his DNA, such as a weak heart; the doctors said that he would only live to around 30. As Vincent grew older, he took a liking towards science and was always like that. His younger brother, Anton Freeman, who was born via genetic selection, has always surpassed him in many aspects including a game of "Chicken," where they'd swim out as far as they could in the ocean, and the first person to swim back lost. Even though his dreams of working at Gattaca are big, Vincent is constantly reminded of his genetic mutation.

One day, he challenges Anton to another game of Chicken. Surprisingly, Vincent wins, and ends up saving Anton from drowning. After that, Vincent rips himself out of a family portrait and leaves the Freeman household.

Years later, Vincent Freeman is a floater, juggling jobs as he goes; usually, he is some form of a janitor. He is eventually hired at Gattaca as a janitor. When he decides to join Gattaca, no matter what it takes, he borrows a DNA ladder from Jerome Eugene Morrow, a former swimming star with a genetic profile "second to none," who was involved in a car crash that left him paralyzed from the waist down. Vincent buys Morrow's ladder and uses his blood, hair, tissue, and urine samples to impersonate the latter in order to work for Gattaca. Vincent gains access into Gattaca with Morrow's DNA and becomes the company's top celestial navigator, along with being selected to go on the manned spaceflight to Saturn's moon, Titan.

A week before Vincent is to leave on the one-year mission, one of Gattaca's managing directors is found bludgeoned to death in his office. Police discover evidence of Vincent's own "invalid" DNA (his eyelash), making him the prime suspect. A paper cup used by Vincent is also found - after he gave it to Caesar the cleaner.

Vincent must evade increasing security measures as his launch date approaches. Simultaneously, he becomes close to one of his co-workers, Irene Cassini. Although she is a "valid", Irene is resigned to her less favorable treatment within Gattaca due to her high probability of heart failure; her initial attraction to Vincent is largely due to his perceived "second to none" superiority, causing her to be slightly jealous. Jerome (generally known as Eugene) also suffers from the burden of his genetic perfection; when he won only a silver in a high-profile competition, he became increasingly depressed. While intoxicated, Jerome confesses that he did not have an accident. Rather, he attempted suicide by jumping in front of a car, but only paralyzed himself from waist down.

After numerous close calls, Vincent's identity is revealed to Irene. Irene finally sees Vincent for who he is and accepts him, in no small part because by living longer than society's projections, he proves anything is possible. The investigation unexpectedly comes to a close as Director Josef is arrested for the murder. The Director reveals that he murdered the mission director because the victim was trying to cancel the Titan mission. As Vincent appears to be in the clear he is confronted by the youthful chief detective, who is revealed to be Anton. Anton accuses Vincent of fraud and asserts that Vincent is unworthy of his place at Gattaca. Vincent offers to prove his worthiness by challenging Anton to "chicken". As he did before, Vincent beats Anton who once again must be rescued by his brother. When Anton asks him how he did it, Vincent reveals that he never saved any strength for the swim back.

As the day of the launch arrives, Jerome bids Vincent farewell. He reveals that he has stored enough genetic samples to last Vincent two lifetimes. Overwhelmed and grateful, Vincent thanks Jerome, but Jerome replies that it is he who should be grateful, since Vincent lent Jerome his dreams. Jerome gives Vincent a card but asks him not to open it until he reaches space. As Vincent moves through the Gattaca complex to the launch site, he is stopped for an unexpected last urine test. Vincent has not brought Jerome's urine to hide his identity as he assumed there would not be any more tests. The test result uncovers Vincent's identity, but Lamar, the doctor conducting the test (and who also conducted Vincent's initial interview at Gattaca) reveals he has known Vincent's identity for some time. Lamar reminds Vincent that he has wanted to tell Vincent about his son who admires Vincent and wants to be an astronaut despite a genetic defect that would rule him out. Lamar simply ignores the test result, allowing Vincent to proceed.

The rocket lifts off with Vincent, and he opens the card from Jerome to find no words - just a hair sample. Back on Earth, Jerome climbs inside his home incinerator, puts on his silver medal and incinerates himself. Suddenly, Vincent is sad to leave Earth, despite never being meant for it. He further muses that "they say every atom in our bodies was once a part of a star," and wonders, "Maybe I'm not leaving, maybe I'm going home."

Retrieved from "https://gattaca.fandom.com/wiki/Gattaca?oldid=5189"
Community content is available under CC-BY-SA unless otherwise noted.